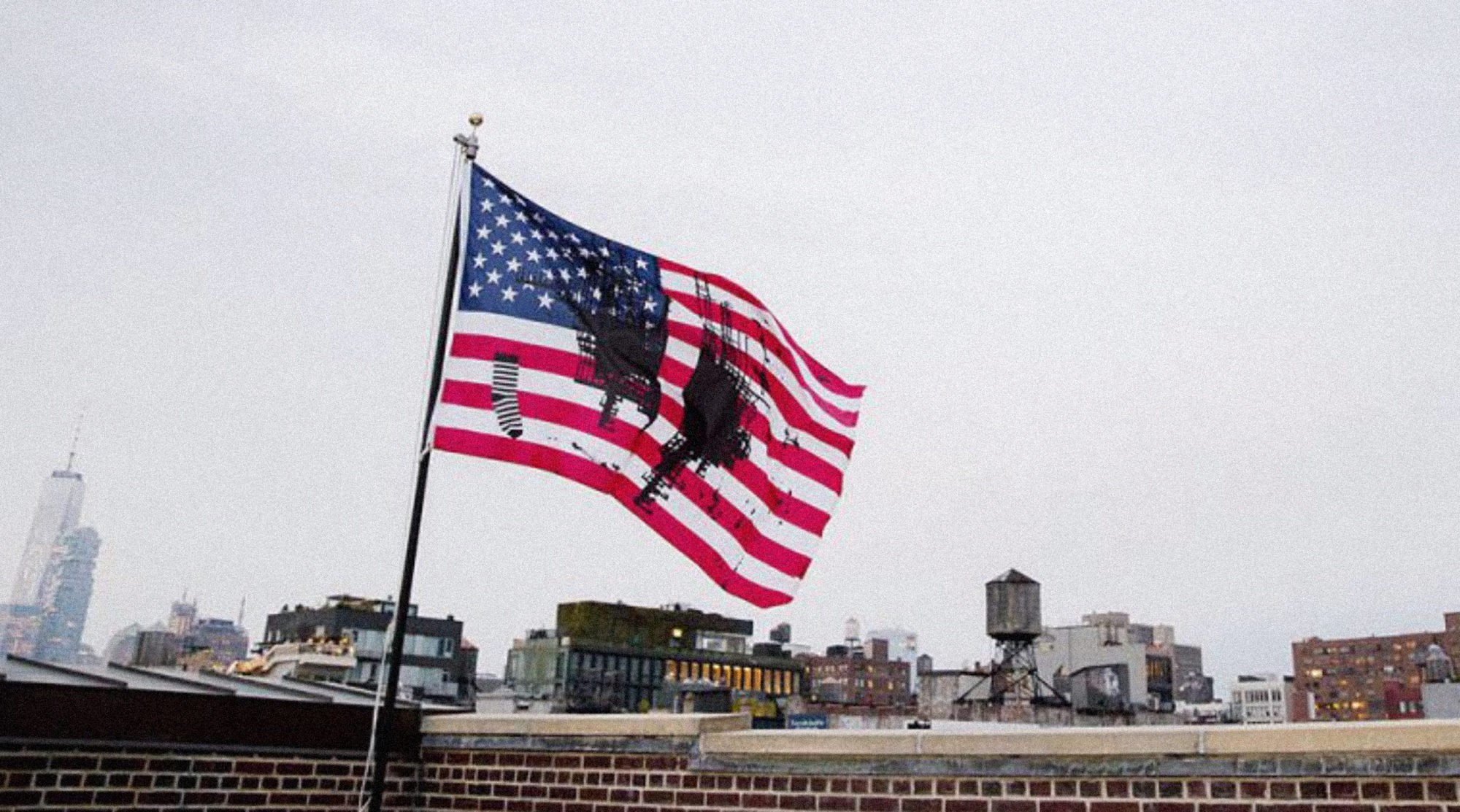 Josephine Meckseper’s contribution to a nation-wide programme of commissions organised by arts organisation Creative Time in 2018 was the next chapter in a long list of artworks that form a critique of American culture through direct reference to the nation’s flag. In Untitled (Flag 2) an abstracted version of the United States map is slashed in two and overlaid onto the iconic star and stripes motif of the American flag. The black, messy scrawl, lifted from one of the drip paintings that Meckseper became known for, is a reflection on the polarisation of American political discourse.

The deeply entrenched divisions that spread across the country under the Trump presidency became manifest in the #MeToo movement, the US’s withdrawal from the Kyoto Protocol and UN Human Rights Council, the administration’s inhumane family separation policy at the Mexican border (alluded to in Meckseper’s flag by the inclusion of a child’s sock), the attempted repeal of the Affordable Care Act, the ‘Muslim ban’, and ongoing support of right wing, racist ideology, ‘America First’ policies, and anti-LGBTQ+ rhetoric.

This alarmingly divisive context created a febrile backdrop to the installation of Untitled (Flag 2) in a public square at the University of Kansas. The university’s alumni Facebook page immediately lit up: ‘This is heinous! Publicly-funded, anti-American garbage from my alma mater’ wailed one commentator; Twitter took the debate onto a national and international stage. A Fox News article by commentator Todd Starnes soon followed, stating that ‘the defaced and desecrated flag’ was ‘a cheap shot at President Trump’, decrying the unfortunate decision by the University of Kansas ‘to associate itself with an artist who despises the very nature of what it means to be an American’.1 A week after the work was installed, Secretary of State Kris Kobach, Kansas Governor Jeff Colyer and congressional candidate Steve Watkins – all representatives of the Republican party – demanded that University of Kansas officials remove the flag on the grounds that they found it ‘personally offensive’ and that ‘the desecration of the American flag is an illegal act’.

The disrespectful display of a desecrated American flag on the KU campus is absolutely unacceptable. Men and women have fought and bled for that flag and to use it in this manner is beyond disrespectful. I have communicated with KU Chancellor Doug Girod … to express my disappointment that a taxpayer funded institution would allow such a display of our sacred flag, and I demand that it be taken down immediately.2

The University’s Chancellor, Douglas A. Girod, succumbed to pressure within the hour, citing public safety concerns as a rationale for the relocation of the work to the more cloistered, less contentious environment of the on-campus gallery, the Spencer Museum of Art. The work’s new home didn’t mollify Governor Colyer who suggested, in an interview on Tod Starnes’ radio show, that it should be destroyed by the American Legion or the Boy Scouts.3

The National Coalition Against Censorship, the Foundation for Individual Rights in Education, and the American Civil Liberties Union of Kansas co-authored an excoriating letter urging the University to take a stand against censorship, uphold the First Amendment, and restore the work to its original site.

Your repeated assertions that desecration of the American flag is an illegal act are erroneous. The use of US flags in artworks is a form of speech that enjoys full protection under the US Constitution. Rather, it is the removal of this work that threatens our closely held civil liberties. As government officials, it is your duty to uphold the First Amendment, which protects controversial or unpopular speech, including works of artistic expression.
…
As Chancellor, it is … your obligation to ensure that the expressive rights of those on your campus are not abridged, compromised, or violated, even and especially when political pressure demands otherwise.
…
In contravention of your obligation to honor the First Amendment, and to KU’s shame, you acquiesced to their brazen demands for censorship. By so doing, you have sent a clear message to the KU community and would-be censors that the institution will capitulate to complaints regarding the content and viewpoint of expression on campus. Successful tactics will be repeated.4

The group also voiced scepticism about the ‘public safety concerns’ laid out in the Chancellor’s statement, suggesting that they may be a pretext for censorship, ‘permitting you to accede to the demands of outraged members of the government and of the general public while still ostensibly maintaining the university’s commitment to freedom of expression’.

Despite these water-tight legal arguments, Untitled (Flag 2) remained in the University’s museum for the duration of the Pledges of Allegiance project.

Both the work and the controversy surrounding it have become a signifier of the polarised positions assumed by a left-leaning cultural ‘elite’ and one of the most divisive presidencies in American history. The hard-won right for artists to make and show work without fear of censorship was eroded in the name of public safety, patriotism and the avoidance of personal offence. The broader educational ideals of public institutions were also significantly undermined in an era that will go down in history as one of the most tumultuous America has ever seen.