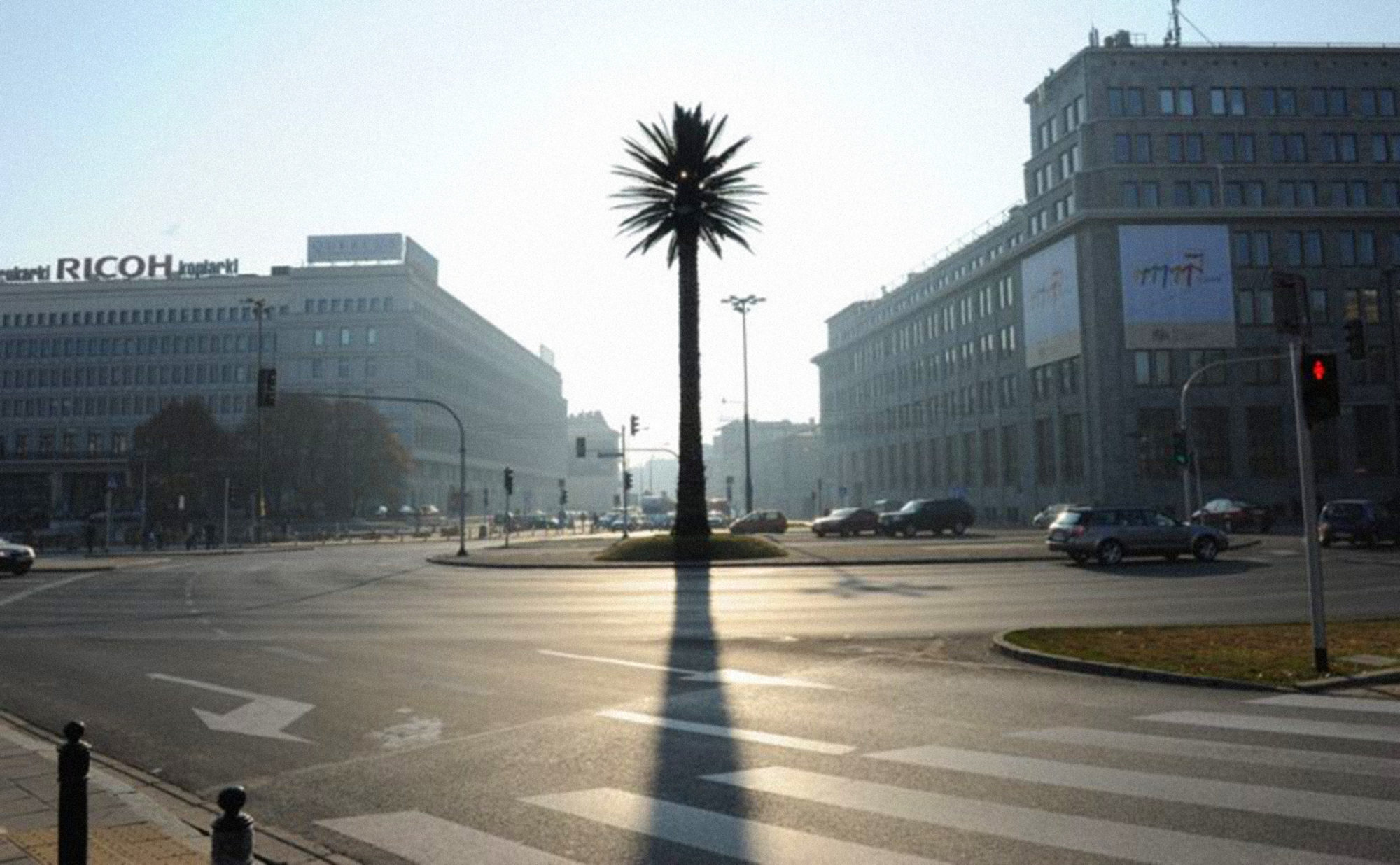 After a visit to Israel in 2001, Joanna Rajkowska became aware of the void left by the absence of the Jewish community in Poland. A year after her return, she installed Greetings from Jerusalem Avenue, a fifteen metre artificial palm tree located at a busy intersection in the centre of Warsaw, Poland. The title of the work refers to an 18th c. Jewish settlement in the city which was demolished by Christian merchants fearful of the Jewish community’s increasing prosperity and expansion.

As well as being a prompt to re-engage the people of Warsaw in a conversation about the derivation of the street name and the forgotten Jewish population, Rajkowska wanted her palm tree to become a social experiment, one that would test ideas about ‘difference’ in Polish society, and consider the extent to which it ‘is ready to absorb an object that is so culturally (and naturally) alien’.1

The tree became the catalyst for many political storms, even before it was installed. Two arts institutions (The Centre for Contemporary Art Ujazdowski Castle and the Institute for the Promotion of Art Foundation) provided technical support for the project but didn’t want to be publicly aligned with it. Ultimately, a large team of volunteers and friends helped Rajkowska realise and maintain the project over a number of years.

Five years after it was installed, the tree was publicly vilified by the far-right authorities who stated that they plan to ‘destroy the work when possible’. Lech Kaczyński, President of Warsaw between 2005 and 2010, led a campaign to eradicate the palm (along with the Warsaw Gay Pride event): ‘When it comes to the palm, we are still bound by the contract, but after it expires, ideas of this kind will not be accepted.’ Rajkowski set up a Palm Protection Committee (KOP – Komitet Ochrony Palmy) to call upon the council to ‘use restraint, to cooperate, and to redefine its status as ‘non-road object ‘ to ‘public sculpture’.2

Today, the tree is considered by many to be a symbol of the city, with tourists and newlyweds posing for photos at its base. It has become the site of political protest and a meeting point that is considered to be at once exotic and familiar, provocative and energising. However, many of the leaves have been damaged through air pollution and the top has now turned an ashen grey. In June 2019 Rajkowska established Death of the Palm Tree, a project commissioned by climate change groups and supported by the Museum of Modern Art in Warsaw to tackle the issue of the impending climate catastrophe.

To celebrate the palm tree’s 18th birthday, the Palm Tree Defence Committee arranged for the tree to be given Polish citizenship and to be recognised in law as a person (a ‘she-person’, as described by the artist). For now, the tree is secure in its location – as well as its identity.

Rajkowska has said that she is interested in the way that projects of this kind accumulate and communicate meaning in their establishment of situations3 – how their political, social or environmental context dictates the ways that they are received or treated. She attributes a level of vulnerability to her public artworks that she aligns with her sense of self; in a 2007 interview Rajkowska declared that ‘the palm tree is my self-portrait’.4

The many stories, proclamations, audiences and whispers that have built up around Greetings from Jerusalem Avenue and Death of the Palm Tree over two decades touch on a multitude of historical and contemporary global issues ranging from anti-Semitism and right-wing ideology, to environmental collapse.