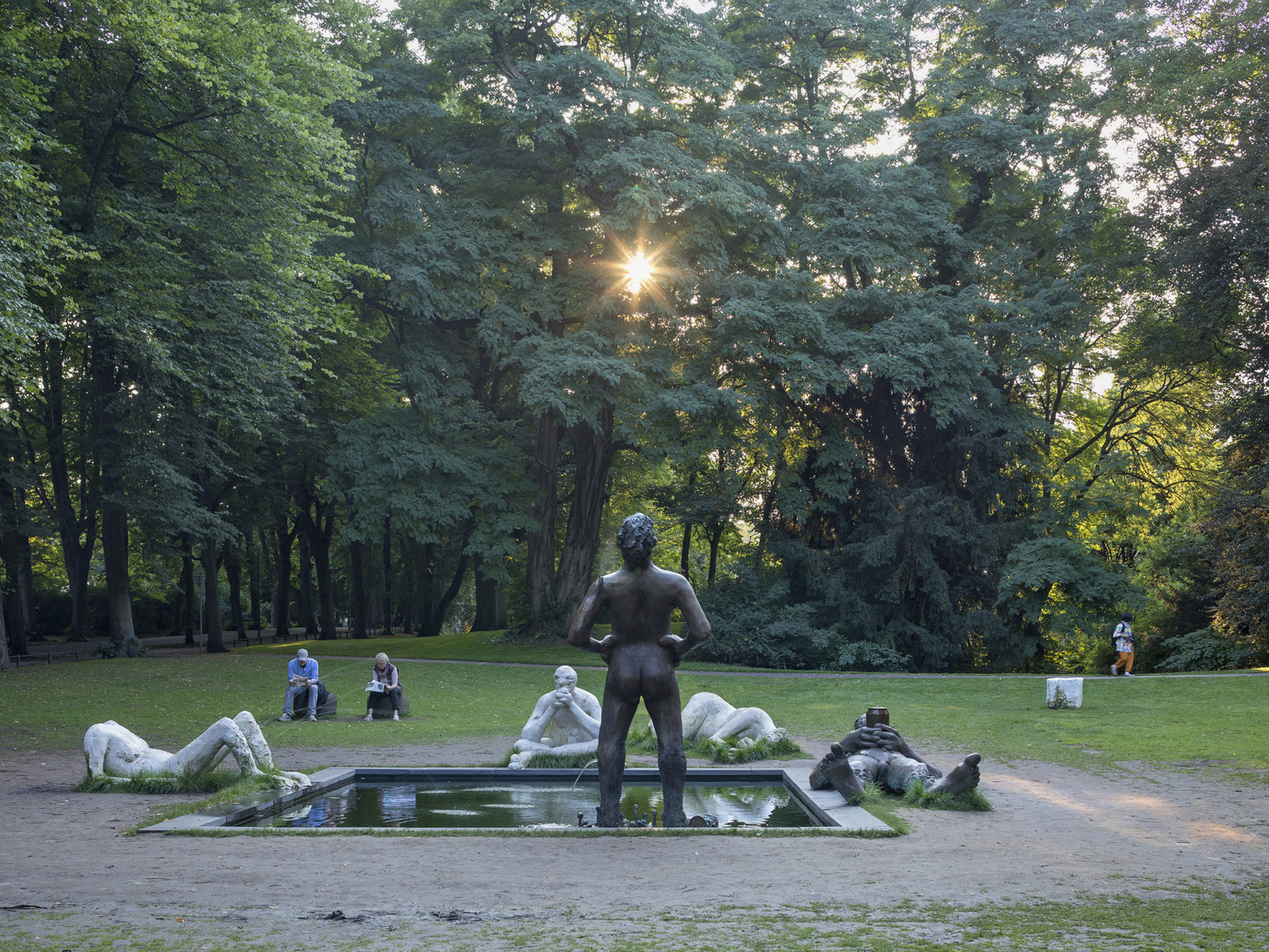 Nicole Eisenman’s contribution to Skulptur Projekt Münster (SPM) 2017 was a collection of five figurative sculptures congregated around a pool in a public park in Münster, north west Germany. Conceived of as a response to the history of public fountain statuary, the characters were genderless, slightly out-sized, and a bit goofy. They seemed to luxuriate in the effect of the sun on their bodies and the sound of water and nature around them. Fungi, snails and cans lay at the base of one of the figures who stood, hands on hips, welcoming this freedom in the public realm. It was a dreamy, tender scene rarely afforded to those who veer from societal gender norms.

Two of the figures were bronze; the other three were made from roughly hewn plaster. Eisenman planned for the plaster works to slowly deteriorate under the fountain’s spray throughout their three month life-span.

The work was situated nearby the so-called ‘love hill’, an area that became known for night-time cruising in the 1960s and 70s.

Eisenman’s Jewish family fled Nazi Germany in 1937. She greeted the invitation to participate in SPM with caution and has spoken about Sketch for a Fountain being a re-union of figures that are finally able to rest and find peace.

The work was one of the most popular sculptures of the SPM 2017 programme. It became the centre of public life in the area, a meeting point for young and old, and the location for many parties, marriage proposals and gleeful children who splashed about in the pool.

One month after installation, on 19 and 20 July 2017, the head of the reclining plaster figure was violently removed and went missing. It has never been recovered. Other sections of the plasterwork were crushed. Eisenman and the curatorial team took the decision to leave the destroyed sculpture in place, only repairing damage to the surrounding landscape.

On the night of 22 September 2017, the work was attacked for a second time. Swastikas were sprayed onto the figures and a nearby statue of 18th century feminist poet Annette von Droste-Hülshoff was also damaged. The curators viewed this latest crime

as an attack against the values of the work, which shows a concept of ambiguity and non-normative body politics. Both artworks were exposed to a fascist form of violence. We express our solidarity with people of any colour or sexual identity and strongly condemn the murderous propaganda of all right-wing parties.1

The swastika attack came hours before Germany elected a far-right populist party to parliament for the first time since World War II. In the 24 September election, the anti-immigration Alternative for Germany won 12.6% of the vote, becoming the third-largest party in the Bundestag – the lower house of parliament.

Last night my piece in Skulptur Projekte Münster was spray painted with a swastika and further vandalized, they broke the fountain pumps. This, on the eve of the election in Germany where its predicted that the AfD will enter the German Parliament for the first time… real Nazis in the German Reichstag for the first time since the end of World War Two.

Within a day, SPM staff removed the paint and repaired the well pumps. Visitors flocked to the work to enjoy it for the last time before it was de-installed and SPM 2017 came to an end.

Many local people were outraged and saddened by the destruction of the sculpture and led a successful campaign to acquire an edition of the work for the sum of €600,000. In dialogue with the artist and Skuptur Projekte Münster curators, the group established a non-profit association called ‘Dein Brunnen für Münster’ (‘Your Fountain for Münster’) and devised an extensive programme of fundraising activities including festivals, exhibitions, a lottery, and sponsorship from local businesses (‘fountain beer, pesto, rolls and dishes’ were served in local restaurants). Eisenman made a logo for the campaign – a drawing of a head of one of the characters – and a limited edition etching called ‘The Munsterians’ which sold out within days.

This new version of Sketch for a Fountain was installed in Münster in 2021. It is made up of three white-patinated aluminium figures and two bronze ones, echoing the design of the original work. The campaigners have agreed with the City of Münster to maintain the work for ten years and have organised a programme of community-based activities around the sculpture. In a statement, campaigners stressed that they felt that the work stood for ‘a peaceful, open society, for equality and tolerance’.2 The desire to re-instate Sketch for a Fountain could legitimately be directly connected to the abuse it suffered.