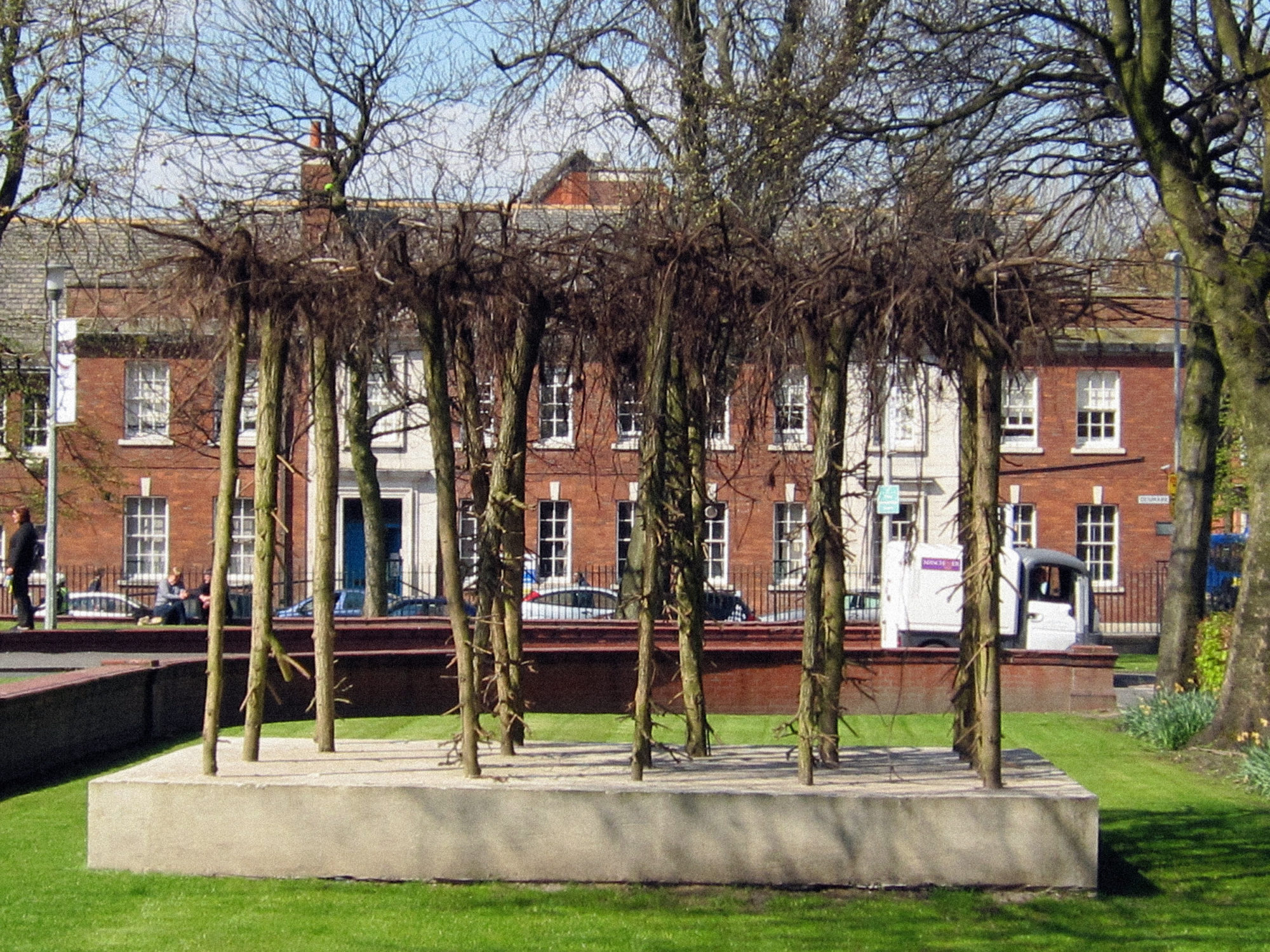 Flailing Trees consists of twenty-one willow saplings that have been upended and embedded in a block of concrete. In this subversion of the natural order, roots take on the frenzied guise of branches, and regimented tree trunks resemble mute soldiers. It is an excoriating protest against the destruction that we bring to ourselves, our planet, and our fellow human beings.

The sculpture was commissioned in 2009 as part of Manchester International Festival and is installed in the grounds of the Whitworth Gallery in Manchester, UK. It is the work of Gustav Metzger, an artist and political activist who fled Germany, parentless, aged twelve, to escape Nazi terror. Metzger was a passionate anti-nuclear protestor and environmentalist who dedicated much of his life to the subject of destruction.

Throughout my life I lived with destruction. Some of it absolutely horrific. So it’s not surprising to me that it led to this concentrated formulation of what destruction is and what it might be in relation to art. My whole desire when I entered art at the age of 18 towards the end of the war was to use art in relation to society – to help heal aspects of society. ..and directly challenge social habits. Destruction is such a wide reality. It’s a physical reality which we are all faced with. It will happen to us without question.1

In 1959, fifty years before making Flailing Trees, Metzger produced his first manifesto of ‘auto-destructive art’. His theories came to broader public prominence in 1965 with the organisation of his now infamous ‘Auto-Destructive Art’ conference, held at the Architecture Association in London.

Auto-destructive art, rooted in the Dada movement and early twentieth century Russian Revolutionary art, is a radical theory that Metzger positioned as a necessary development in modern art and a struggle against future wars. It is ‘an attempt to deal rationally with a society that appears to be lunatic.’2 The threat of nuclear war, pollution, execrable living conditions, contaminated food, stultifying education systems, and the debilitating demands of the capitalist system, all paved the way to a self-destroying society.

Metzger proposed that the auto-destructive art movement embrace the construction of large-scale, industrially produced sculptures that disintegrate, fragment, shatter, explode, vibrate, erode or corrode over time. Made of tectonic, electrical, chemical, mechanical, computerised elements, this ‘aesthetic of revulsion’ would, he figured, result in a form of catharsis in the spectator and lead people to reject many aspects of our civilisation. “Auto-destructive art sets up a kind of mirror image of reality. Society is deteriorating. So is the sculpture.”3

Metzger’s theory never took off, but his commitment to the idea that he could forge a transformative relation to art, society and our environment stayed with him until his death, age 91, in 2017. In 2014 he launched a day-long call to action in partnership with the University for the Creative Arts in Farnham, London Fieldworks, and London’s Serpentine Gallery called ‘Remember Nature’. Focusing on the catastrophic effects of climate change, Metzger appealed to the art, architecture and design world to take a stand against the on-going erasure of our natural environment: “… It is our privilege and our duty to be at the forefront of the struggle. There is no choice but to follow the path of ethics into aesthetics.”4