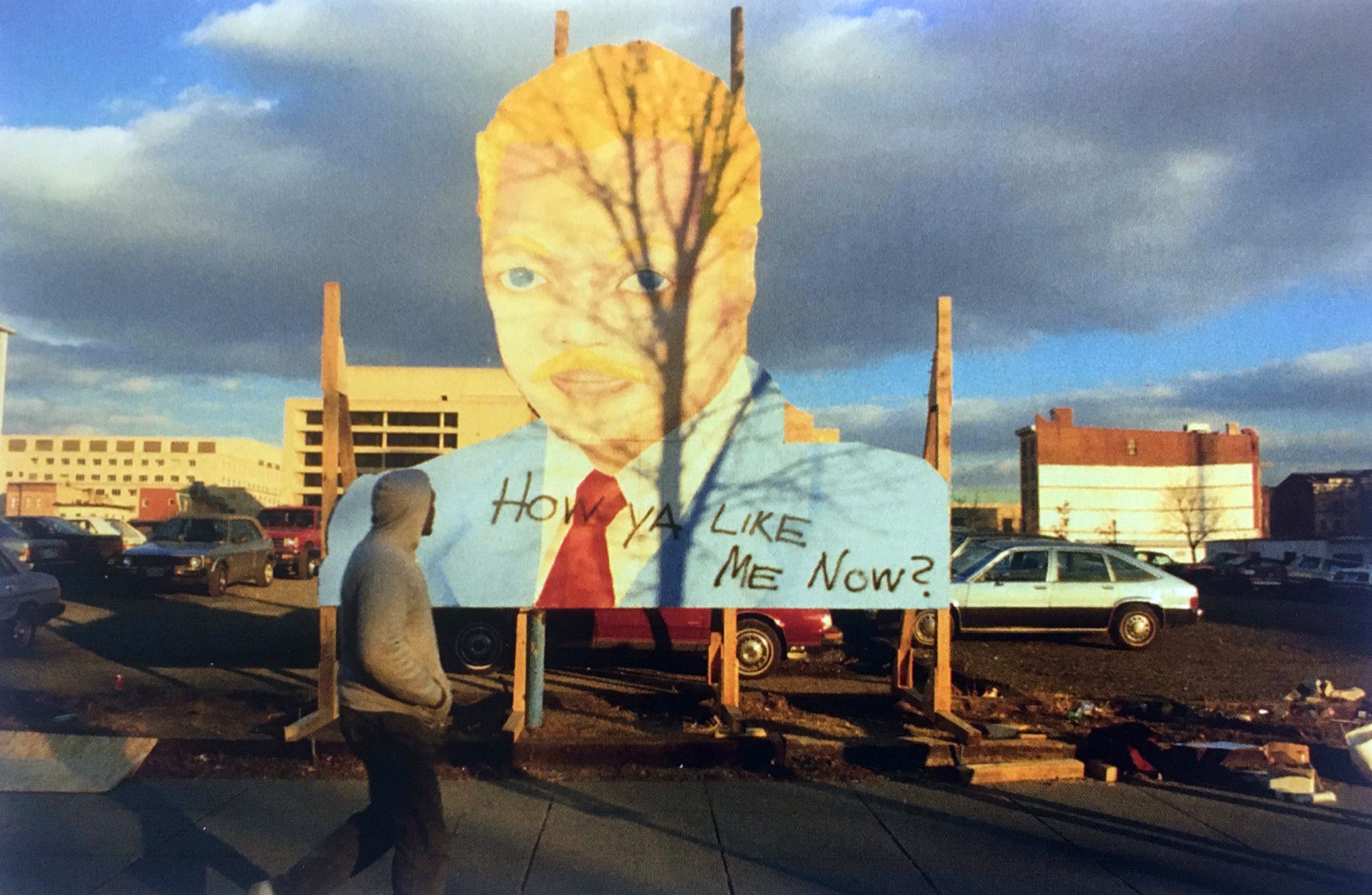 David Hammons, How Ya Like Me Now?, 1989, Washington DC. Photo: Philip Brookman.

How Ya Like Me Now? is a billboard-sized, cut-out portrait of a white-skinned, blond haired, blue-eyed Jesse Jackson (the civil rights activist and politician). The title of a popular song by rapper Kool Mo Dee How Ya Like Me Now? is spray-painted across the bottom of the work. It was installed in a car park opposite The National Portrait Gallery in Washington DC as part of The Blues Aesthetic: Black Culture and Modernism, an ambitious exhibition organised by Richard Powell at the Washington Project for the Arts in 1989.

After months of bureaucratic wrangling with DC authorities, permission was granted to install How Ya Like Me Now? in the public realm. When Richard Powell left three white WPA staff members to finish the installation, a crowd of young Black men gathered at its base. Assuming that it was a racist slur against Jackson, they began to voice their anger, took a sledgehammer to the work and tore it down. The only piece left standing was Jackson’s blonde afro and a section of his blue eyes. The incident made national and international news, with articles appearing in the Los Angeles Times, The International Herald Tribune and the New York Times.

A repaired version of How Ya Like Me Now? went back on view in the protected environment of the Washington Project for the Arts for the duration of the exhibition. Hammons installed a series of sledgehammers and Lucky Strike cigarettes around the work, bringing the act of destruction into its ongoing narrative.

How Ya Like Me Now? is a commentary on the absence of images portraying African Americans at The National Portrait Gallery. The suggestion is that if Jesse Jackson – the most prominent African American in the US at the time – had been white, his portrait would be in the museum collection.

Much of the ensuing commentary focused on the ‘vandals’ and their uninformed response. Even the (Black) curator Richard Powell referred to ‘hotheads’ and ‘roughhouse types’, implying that the mens’ response was a mindless act of violence:

All they saw was that Jesse Jackson was painted white. They didn’t stop to think about the complexity of what the message was.1

The spokesperson for Jesse Jackson’s Rainbow Coalition took a different view, choosing to acknowledge that the destruction was a response to the historical and political make-up of a deeply divided and racist society.

This particular artist gave artistic expression to…what African American people have had to live with, and that is if Jackson were white, he would be president…Apparently, the pain of that kind exploded among some people, and that’s why the destruction took place.2 Hammons himself kept a low profile throughout the public furore. He realised pretty soon that ‘the less he said, the more the story would tell itself’.3
We use cookies.