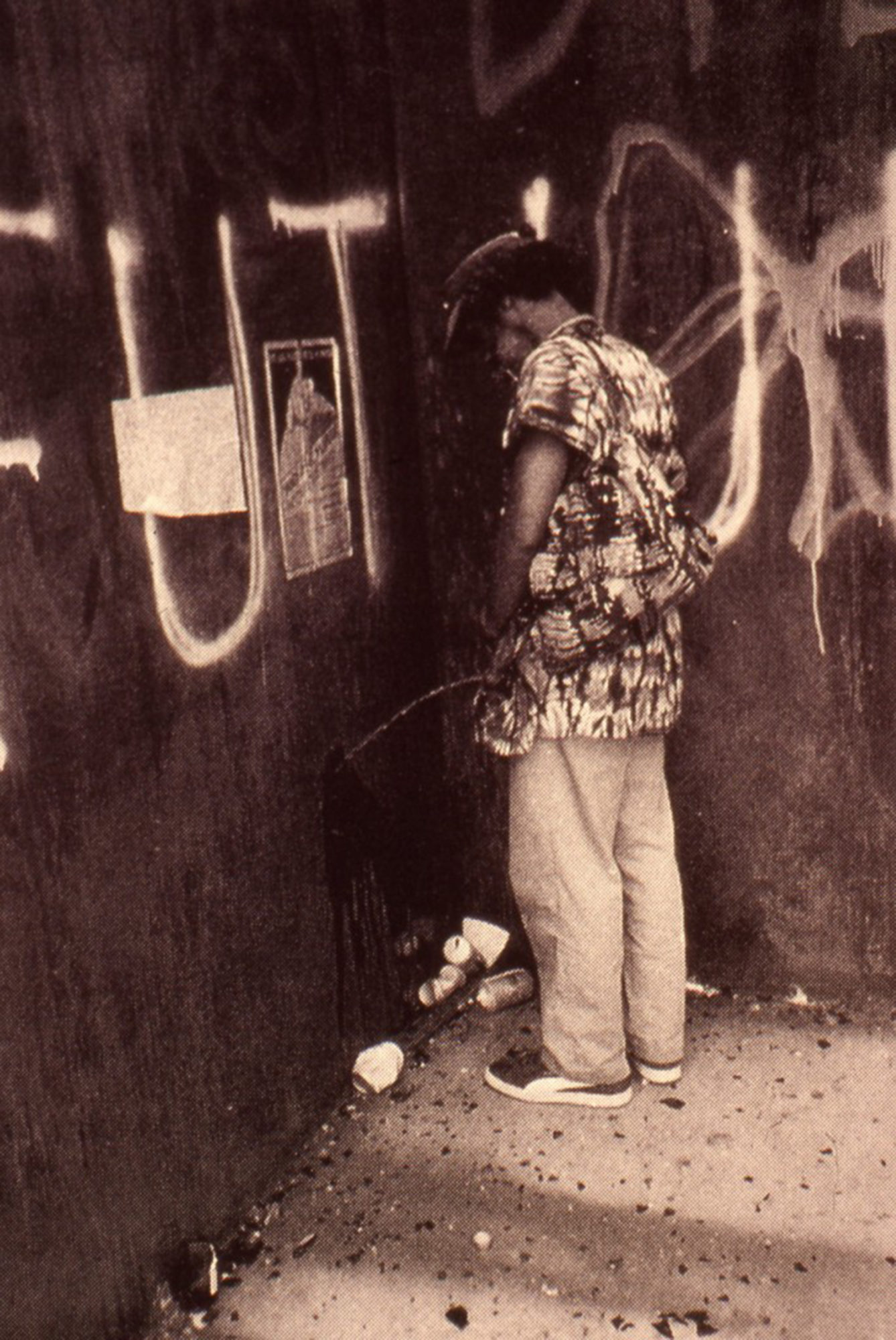 It only took a year for Richard Serra’s sculpture T.W.U. (Transport Workers Union) in Tribeca, New York, to begin to look shabby. Its three, ten-metre-high Corten steel plates were strewn with empty cans, graffiti and fly posters. This was the moment artist David Hammons chose to carry out his performance Pissed Off, documented by photographer Dawoud Bey.

In a series of three still black and white images Hammons is seen standing in a corner of T.W.U. wearing khaki trousers, puma trainers, a sun visor and a dashiki, holding a white plastic bag and a collection of papers. He’s looking directly at the camera, relaxed, defiantly blank. In the second image, the bag and papers have gone and he’s turning towards the wall, pissing into the corner. The third photograph shows him talking to an NYPD officer who seems to be inspecting documents given to him by Hammons (a passport?).

As with many of Hammons’ works, we can never be sure of the veracity of the narrative. Was he issued with a citation from the police officer? Was he arrested? Or was the whole thing staged? In the ensuing years, commentators have deliberated over whether this ‘smelly, formless and furtive’ performance was a comment on the socially mute nature of formalist sculpture or more of a homage to Duchamp, the daddy of conceptual art, and his urinal1. Perhaps Hammons was just marking his own territory, using humour, puns and ‘low-level’ street talk to cut through what he considered to be the bullshit of the artworld.

Later that year (1981), Hammons chucked twenty five bits of foot-ware (mainly tennis shoes but also work boots, wellies and at least one pair of high-heeled shoes) over the top of the same sculpture, leaving them dangling by their laces. Often considered to be a youthful prank – involving telephone wires – this shoe-flinging activity is sometimes associated with gangs in crime-ridden areas, signalling a murder or marking the boundary of a particular group.

Serra was said to be upset about this intervention which he considered to be a defamation of his work. He was unaware, however, that the activity was orchestrated by another artist rather than a group of kids. It was only years later that the photograph of Shoe Tree began to circulate, subtly announcing Hammons as the author.

Hammons is famously mute about the rationale for his artworks, but it’s likely that he enjoyed, or at least took note of, the inevitable rush of the predominantly white members of the artworld to force a connection between gang-related activity, the black artist and Shoe Tree, as well as the ensuing debate over whether he was making a statement about the power imbalance between white institutions and African American communities, or the dehumanising aspects of Minimalism.