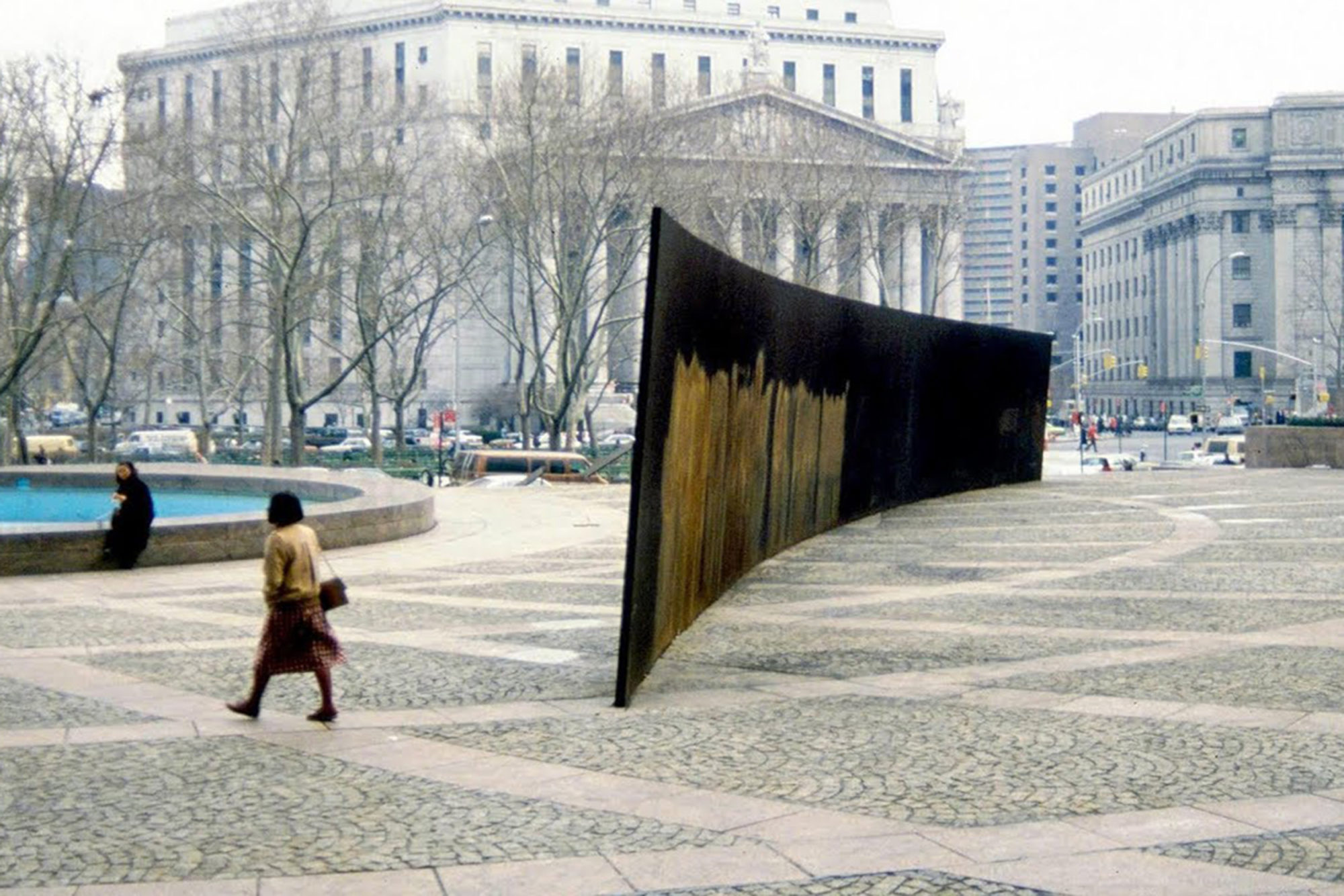 Titled Arc by Richard Serra was installed outside government buildings in Federal Plaza, New York, in 1981. It was, in effect, a wall of steel measuring 3.6m high and 36.6m long, leaning slightly to one side and forming a subtle arc. It was commissioned by a panel representing the Art-in-Architecture Programme at the General Services Administration (GSA) as a permanent addition to the square.

The story of its deinstallation marks one of the most contentious, drawn out chapters in the history of art in America. The work became the focal point of heated discussion both in a court case against the Government filed by Serra (he sued for $30 million), and in a nationwide debate over Federal artists’ rights legislation.

After its installation, office workers in surrounding buildings gathered 1,300 signatures for two petitions seeking the removal of the work, which they deemed to be ugly, oppressive and a ‘graffiti catcher’. The GSA stood firm, stating that the petitions represented a minority viewpoint given that the workforce consisted of 10,000 employees.

A few years later, in 1984, the makeup of the GSA members changed with the arrival of William Diamond, a new Republican-appointed regional administrator. Diamond set up a three-day public hearing to discuss the proposal to relocate Tilted Arc, appointing himself head adjudicator.

180 people spoke at the hearing, including Serra who made the case that the work was site-specific and would not function as an artwork if it was moved elsewhere. He strongly denied that the work interfered with the way that the plaza was used by office workers and local people. In all, 122 respondents, including many eminent figures in the artworld, spoke in support of Serra and Tilted Arc; 58 people (many of them Federal Plaza office workers) spoke against the work. The panel voted to relocate Tilted Arc.

Serra entered a protracted legal battle with the GSA but the courts ruled that the GSA owned the work and were therefore able to determine its fate.

At the hearing, dealer Holly Solomon supported the retention of the work on the grounds of financial worth: “I can only tell you, gentlemen, that this is business, and to take down the piece is bad business…the bottom line is that this has financial value, and you really have to understand that you have a responsibility to the financial community. You cannot destroy property”1. Artist Frank Stella, a good friend of Serra’s, played the art-as-civiliser card: “No public dispute should force the gratuitous destruction of any benign, civilizing effort.”2

Statements made to support the de-installation of the work were presented by office workers. It’s worth quoting this one in full:

My name is Danny Datz and I work in this building as a clerk. My friend Vito told me this morning that I am a philistine. Despite that, I am getting up to speak…I don’t think this issue should be elevated into a dispute between the forces of ignorance and art, or art versus government. I really blame government less because it has long ago outgrown its human dimension. But from the artists I expected a lot more. I didn’t expect to hear them rely on the tired and dangerous reasoning that the government has made a deal, so let the rabble live with the steel because it’s a deal. That kind of mentality leads to wars. We had a deal with Vietnam. I didn’t expect to hear the arrogant position that art justifies interference with the simple joys of human activity in a plaza. It’s not a great plaza by international standards, but it is a small refuge and place of revival for people who ride to work in steel containers, work in sealed rooms, and breath recirculated air all day. Is the purpose of art in public places to seal off a route of escape, to stress the absence of joy and hope? I can’t believe this was the artistic intention, yet to my sadness this for me has been the dominant effect of the work, and it’s all the fault of its position and location. I can accept anything in art, but I can’t accept physical assault and complete destruction of pathetic human activity. No work of art created with a contempt for ordinary humanity and without respect for the common element of human experience can be great. It will always lack a dimension.3

On 15 March 1989, eight years after it had been installed, Tilted Arc was cut into three parts and removed from the site. It was stored in a warehouse in Alexandria, Virginia where it remains today. Its components are ‘preserved as artefacts of what was formerly known as Tilted Arc’4. Serra regarded the work as destroyed because it had been removed from the site that it had been designed for. He stated that, in disregarding his argument and taking the view that the work was transferrable to another site, the GSA had made it ‘exactly what it was intended not to be: a mobile, marketable product’5.

After the work was removed, Diamond announced that a ‘new art form – open space’ would be exhibited in the Plaza. Benches, plants and trees were installed. A few years on, internationally celebrated landscape architect Martha Schwartz was commissioned to enliven the square with a maze of bright green and purple seating and planting that were intended to allow for conversation and social interaction for nearby office workers. This gimmicky PoMo scheme didn’t last long, either; it was soon replaced with a simple pink and white marbled scheme by another landscape architect Michael Van Valkenburgh. The ghost of Tilted Arc continues to reign over the site.

Over the last thirty years, the conversation around the power and agency of the spectator has shifted towards a more process-based methodology where public engagement is prioritised. Serra was deeply embedded within the language and approach of Minimalism which espoused an explicit disinterest in the viewer: “If you are conceiving a piece for a public place…one has to consider the traffic flow, but not necessarily worry about the indigenous community, and get caught up in the politics of the site”6. This view is echoed by Serra’s close ally, Robert Morris, another key player in the story of Minimalism: “…sometimes it’s horrible – you just can’t get the viewers to do what you want.”7

Art historian Anna C. Chave’s seminal essay on Minimalism in Arts Magazine included an excoriating take on Tilted Arc and Serra’s disregard for users of the square: ‘In the severity of its material, the austerity of its form, and in its gargantuan size, it served almost as a grotesque amplification of Minimalism’s power rhetoric. Something about the public reaction to that rhetoric can be deduced from the graffiti and the urine that liberally covered the work almost from the first, as well as from the petitions demanding its removal.’8

The Tilted Arc furore paved the way for a significant change in the law with the passage of the Visual Artists Rights Act of 1990 which recognised an artist’s continuing moral rights in a work, and permitted artists, under certain circumstances, to sue an owner of their work if it is mutilated or destroyed.