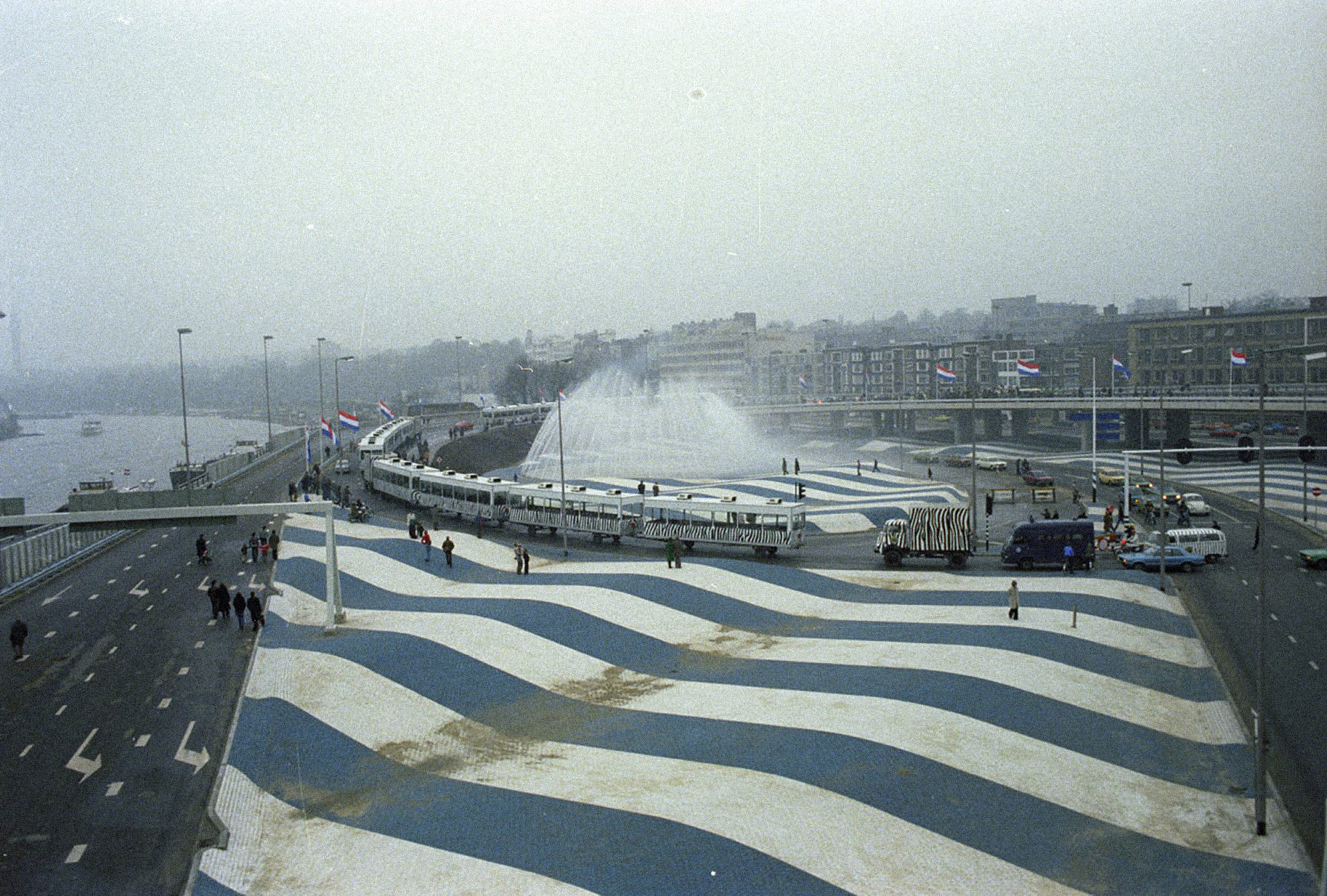 De Blauwe Golven (Blue Waves) is the largest outdoor environmental artwork in The Netherlands and is a key work of the Arnhemse School, a movement established in the 1970s to form a dialogue between art and urban design. The work, which was completed in 1977, is an outdoor parking area consisting of a bold, undulating pattern of white and blue paving stones. It is situated beneath a bridge that crosses the Rhine in central Arnhem, an hour south east of Amsterdam. In 2017 the municipality of Arnhem, supported by the adjacent ArtEZ Institute of the Arts, launched a plan to demolish the coloured paved structure and turn it into a park. The new proposal was hailed as a ‘city upgrade’ and called Groene Corridor (Green Corridor).

Groene Corridor was challenged by Amsterdam-based artist Hans van Houwelingen who gathered a group of young artists and students from ArtEZ to carry out a two year research project called Tussen Blauwe Golven en Groene Corridor (Between Blue Waves and Green Corridor) that attempted to unearth the decision-making process behind the new proposal. They posed a series of questions: Who owns this work?, Who has the authority to destroy or radically adapt it?, What is the value of our cultural heritage and who determines it?, How are politics and art intertwined? What hidden agendas are at play? Do members of the public have a say in a decommissioning process? Does the artist have a right to be consulted? What are the legal ramifications for the proposed destruction of De Blauwe Golven?

Their research revealed that the rules associated with the decommissioning of public artworks in the Netherlands are at best opaque. Decisions are made on a flimsy case-by-case basis, where vested interests and opportunism are often employed to push decisions through a convoluted political and administrative system.

Spokespeople for the new development constructed a narrative around Peter Struycken’s response to the proposed demolition stating that he vehemently opposed any changes to his design (“He prefers to let his artwork disappear.”)1 In fact, Struycken had made a public statement emphasising that he was only too happy to enter a dialogue about a redesign of the work.

A lawyer interviewed by the students stated that the council’s interests were best served by claiming lack of cooperation by the artist. In Dutch law, when an artist agrees to part-demolition of a public artwork, they can be included in discussions about the project as a whole. However, if they refuse to play ball and insist that the original work is retained, the Supreme Court rules that the artist’s rights have not been breached, and that demolition can go ahead.

It became clear that the artwork was being used as a pawn in a political process, to shore up the short-termism embedded within the local government system. Conflicts between the interests of local political parties, the council, ArtEZ, the Arnhem Museum, cultural heritage organisations, commercial developers and the general public came to the fore. The irony that it was an art school that was spearheading the redevelopment plan, in order to increase the value of their property, and that the Arnhem Museum backed the demolition in order to receive a municipal subsidy for its renovation, was not lost on the students. The ArteZTeam publicly disclosed the fact that ArtEZ and the Arnhem Museum provided the municipality with institutional ‘permission’ to demolish the artwork.

Much was done by the council to ensure that De Blauwe Golven was considered to be an eye-sore by locals. It was badly maintained, the fountain no longer worked, dirt and debris built up in the undulations, red lines were painted over the blue and white stripes to demarcate parking spots. Sections of it were painted over in a lurid, shiny blue. As a last resort, one social liberal party councillor referred to his love of art as a defence for its destruction: “I’m an art lover myself, but sometimes an artwork has to be thrown out of the house, you know?”2

It got heated. The council approved the postponement of a final decision until the results of the research of the ArteZTeam had been submitted. The Executive Board of ArtEZ publicly dissociated the institution from the students’ research. The Dutch arts funding body, The Mondriaan Fund, gave the ArtEZTeam a grant of €20,000 to professionally clean De Blauwe Golven, to reveal the effectiveness of the work and return it to its original state. The council had stipulated that it cost two million Euros to carry out this task.

After a protracted interlude, in April 2019 the city council called a meeting to vote on a proposal to retain the work and not to proceed with the redevelopment plans. The resolution was approved 27 in favour, 10 against.

This is a story involving vested interests, disregard for artistic authorship, and institutional collusion. It highlights the impact of neo-liberal policies including outsourcing, lack of accountability, and the privatisation of further education. It signals a move to the right that is currently underway in Dutch politics, which has long-term implications for the cultural infrastructure in the country as a whole. It is also the story of how the voices of a small number of young people came to impact on policy and effect change.