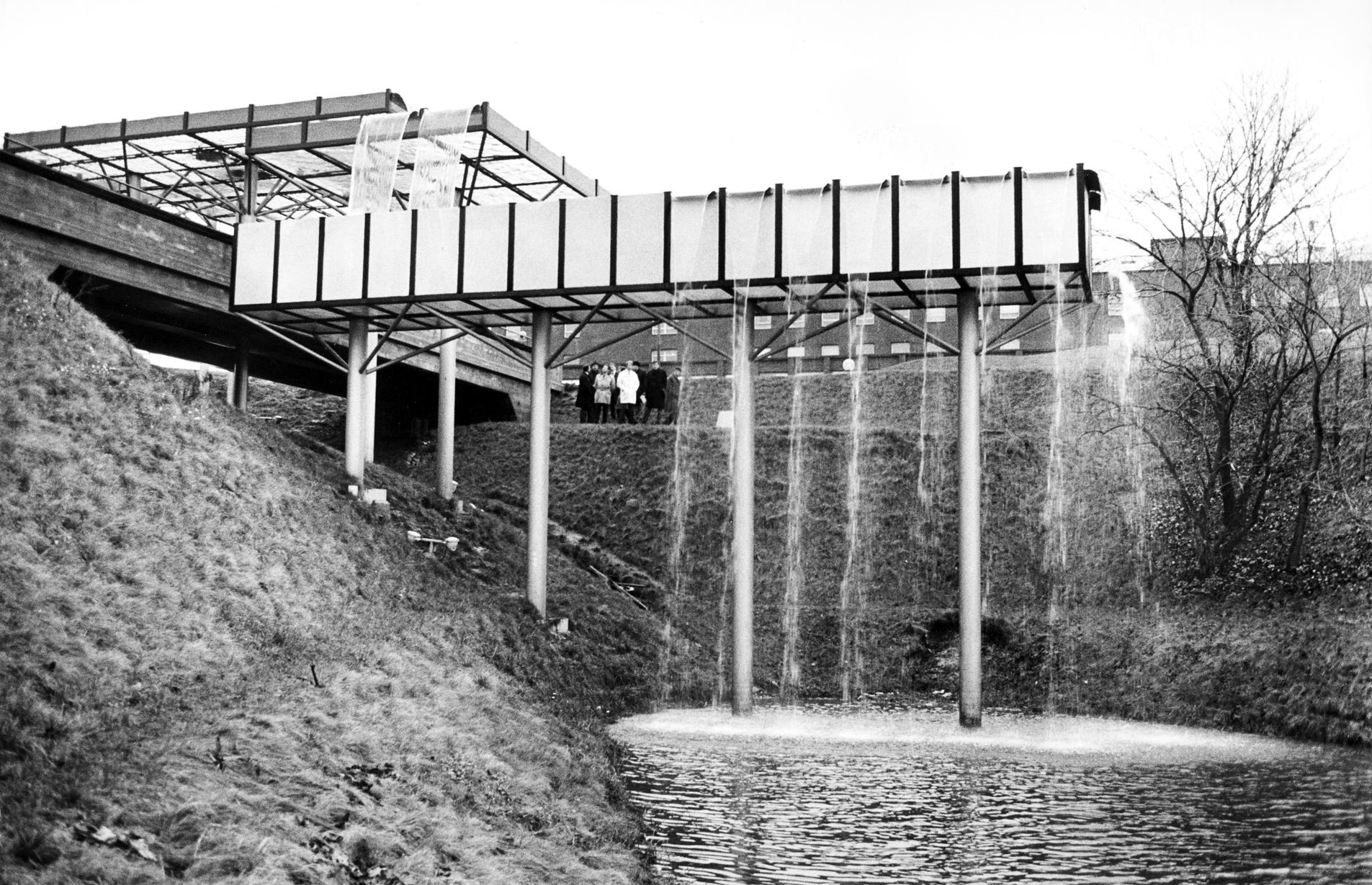 When LTH-fontänen was launched in 1970, it was heralded as an “artistic-technological cathedral of steel, glass and water without parallel in the world.”1 Fifty years later, it was given the equally bombastic description of the “biggest failure of a public art work in Sweden.”2

Designed by long-term collaborators and friends, architect Klas Anshelm and artist Arne Jones, the fountain was installed in the grounds of Lunds Tekniska Högskola (now the Faculty of Engineering at Lund University) in south Sweden. The 50 × 20 metre skeletal structure was made up of eleven interconnected clusters of glass and steel basins that are mounted on eleven-metre-high columns. Together they spanned a walkway and public seating area, two small lakes, grassland, and a selection of trees.

Water was supposed to funnel into the basins where it would spill out onto the lakes below, forming an impressive cascading effect (“like a champagne tower”)3. The design took the traditional visual language of a 19th century fountain into bold, new, geometric directions. The verdant landscape framed a particularly rich conversation between the utopian ideals of 1960s planning with the constructivist tradition of 20th century modernism and its links to the ambitious engineering feats of the late 19th century. The aim was to create a contemplative environment in which staff, students and visitors could sit and enjoy the sensation of rushing water over head. Architectural historian Olle Svedberg described the fountain in its heyday: “…the few blissful moments when it all worked, water pouring from one glass bowl into the next high up in the air, finally falling gracefully into the old clay quarry.”4

Almost as soon as it was installed, the fountain sprung a myriad of leaks and malfunctioned; maintenance costs spiralled, and the university administration despaired. The glass grids seemed unable to withstand the pressure of the water and stresses formed by strong winds, and by the 1980s the university had stopped maintaining the work altogether. Ten years later, the fountain lay in ruins, a blight to the reputation of an institution that prides itself on its research into technological advances. Whispers began to spread about the nature of the malfunction: was it due to a mathematical miscalculation concerning the load-bearing capacity of the glass sheets, or was this the handywork of ‘vandals’ (local newspaper articles talk of “sabotage by slingshot”5)?

A ray of light in an otherwise relentlessly gloomy story was provided by the organisation of an event held to celebrate the final run of the fountain on 18 August 1996. Photographs and newspaper clippings bear witness to a beautiful sunny day in which staff spoke movingly about the fountain – its history and their memories of it – and students hung out whilst Verdi’s Requiem played through loudspeakers installed in the walkways. For the first time in twenty years, the fountain functioned as it was designed to do, albeit with leakages and a few cracks to the system. Water from the fountain was collected in a bucket and reportedly bottled and stored in an office somewhere on the LTH campus.

In the late 1990s, the glass was removed and the steel structure of the basins modified. Engineering reports revealed that both options of removal and restoration were more costly than low-level maintenance of the structure as it stood. For now, the skeleton remains, and, in some people’s eyes, the work has assumed the guise of a sculpture, rather than a ‘failed fountain’.

In 2020, artist Maddie Leach embarked on a long-term research project looking into the history of the fountain, the stories behind it, the people involved, and its possible future life. Positioned as an artwork called The Fountain: An art-technological-social drama, the project considers the ways in which LTH-fontänen could offer a context in which a new public artwork could emerge. Steering clear of any ambition to get the fountain working again, Leach is interested in developing an alternative artistic proposal which will kick-start a discussion about authorship, artistic originality, and the extent to which it is possible to reimagine a work of public art by another artist.

If an artwork is partially dismantled or dysfunctional, what is its status as an artwork? Is it only a remnant? How long should we live with public artworks and when can change legally occur? For example, if I reimagine LTH-fontänen in some form, what are the implications for the original artwork? Who is the author? What are the legal implications in relation to the estates of Klas Anshelm and Arne Jones?6

Leach’s research has led her to consider the idea of what she calls ‘functional absence’ – an unseen or unanticipated thing that forces an acknowledgement and redirective possibility for an artistic idea.

‘Functional absences’ create a unique cartography of voids within my projects – insisting on an unforeseen relation between what was thought to belong to the project and what was unthought or considered not to belong.

I like the idea of a radical openness, the potential for public artwork as an open-source idea – an unsettled thing that artists can contribute to over the years. If I follow this through, I have to accept that my work can be altered and a new artwork created in its place. How do we construct a contract for an artwork that could embody this sensibility or aura of possibility?7

The hope is that the conceptual provocation embedded within The Fountain: An art-technological-social drama will demonstrate a sustainable approach to issues relating to duration, changes to the demands and conditions of the public realm, and the role of artworks in public space.