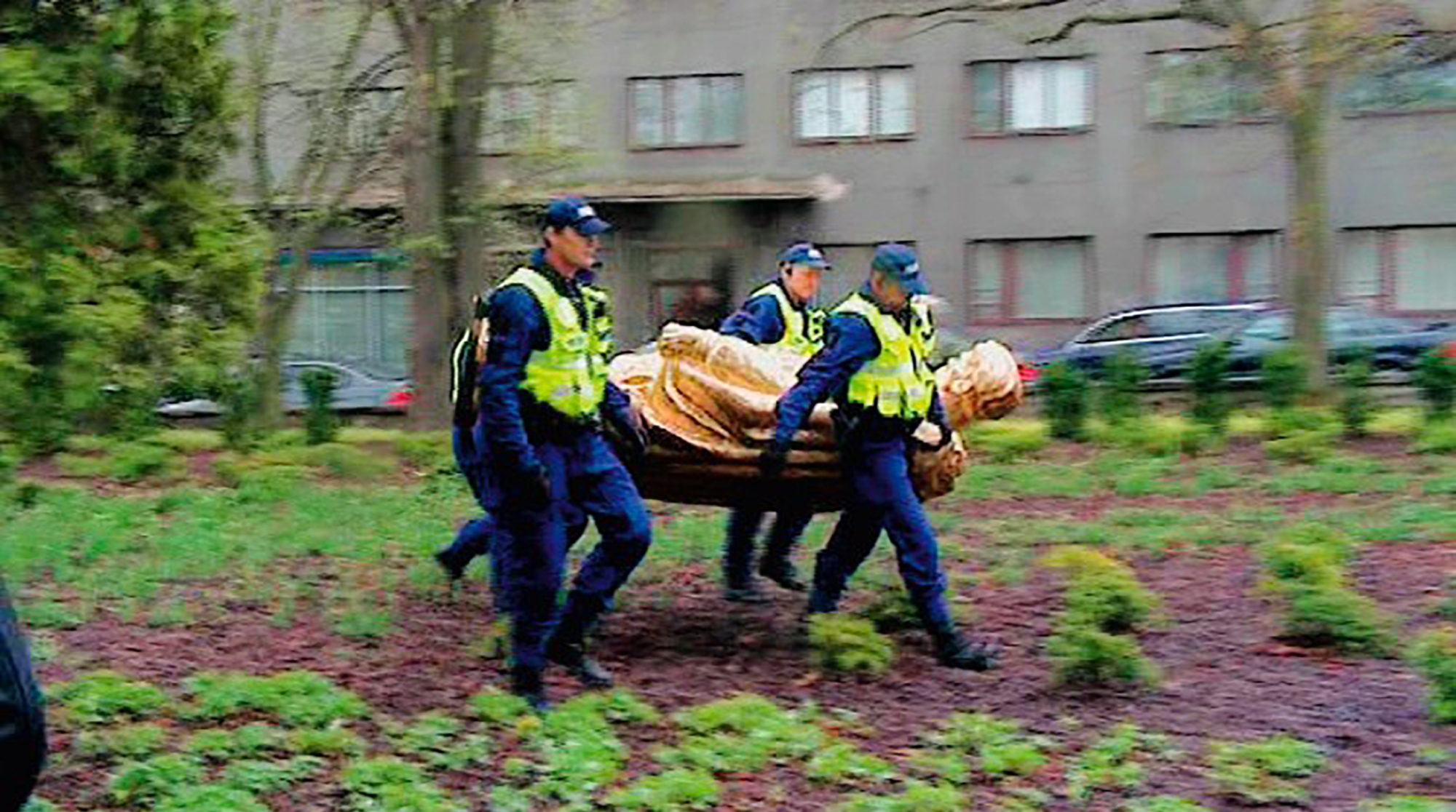 In 1947, during the aftermath of World War II, Bronze Soldier was installed in a central location in Tallinn, Estonia. The monument marked the grave of Red Army Soldiers and became the focal point for tension in the city regarding Estonian independence. Estonian nationalists viewed it as a symbol of occupation and repression; for Russian-speaking Estonians it celebrated the victory over Nazi Germany. When the Soviet Union collapsed in 1991, the monument became a positive signifier for Russian identity in Estonia.

In April 2007, amid growing tensions between the two factions, the Estonian government relocated the monument to a military cemetery 2.5 km away, along with the remains of the soldiers who were buried near the monument. This symbolic act of marginalisation carried out by those in power was followed by two nights of rioting in the streets of Tallinn, which later became known as the ‘Bronze Nights’. International news coverage followed, with the authorities insisting on the success of the police operation to quell the protests. Pro-Russian demonstrators were portrayed as having shown their ‘real face’ – a criminal, violent people intent on creating division and friction. Rumours circulated about police brutality and inhumane treatment in custody cells. Each side assumed the identity of innocent victim, convinced of their righteousness.

A year later, on 9 May 2008, artist Kristina Norman made a series of small plaster-cast copies of Bronze Soldier and installed them around the newly located monument. It was an experiment – she wanted to see how much these representations could stand in for the ‘real thing’, how much the potency of the original could be channelled into another object. They were received with enthusiasm (“You could make a lot of money selling these!” was one response) and one of works was taken by a member of the public to the original location in central Tallinn where the soldier once stood.1 The evening news showed people laying flowers and candles next to the miniature statue; it became a pilgrimage for local pro-Russian citizens to express their allegiance and symbolic roots.

This response spurred the artist on to install a life-size golden replica of the monument in the original location, a space that had retained its loaded status in the years it had remained empty. Norman’s provocation, made all the more visceral by the fact that Russians celebrate Victory Day on 9 May, was predicated on the idea that the deep divisions between the two groups weren’t eradicated through the relocation of the monument, but instead were left to fester unaddressed in the aftermath.

A video shows a crowd gathering at the site; people begin to lay red carnations in the crook of the statue’s arm; they take photos of each other with the soldier as backdrop; armed policemen arrive. They topple the statue and carry it unceremoniously to a truck where it is carted off. Someone yells “Fascists!” The artist is taken into custody.

During a two-week investigation, the police came under increasing pressure from members of the public who demanded that Norman be prosecuted for her actions. However, there was no law that she could be charged under; instead, she was symbolically penalised with a warning and her sculpture was returned to her soon after.

Norman positions her action in tripartite form, as an art research project, a participatory experiment and an intervention. Her identity as both Estonian and Russian no doubt served her well; her insistence that she was taking neither side was inscribed in her DNA.

Her aim was to create the conditions for a less binary approach to history, to question the concept of ‘winners’ and ‘losers’ in historical narratives. Unusually for a work made in the Baltic States, After-War refused the dominant post-independence narrative of Estonian victimhood and Russian aggression. “By not choosing a historical ‘truth’ from either of the confrontational ‘memory collectives’, I am asking uncomfortable questions regarding democracy, tolerance, xenophobia and fear.”2

Much to the chagrin of both Estonian and Russian constituent groups, After-War (a play on ‘after-party’) was presented at the 53rd Venice Biennale, in the Estonian Pavilion where the golden statue was positioned horizontally hovering just above the floor, as if levitating. The work became a ‘floating signifier, the meaning of which had not yet been agreed upon’.3 The toppling of a succession of monuments and narratives remains unresolved.