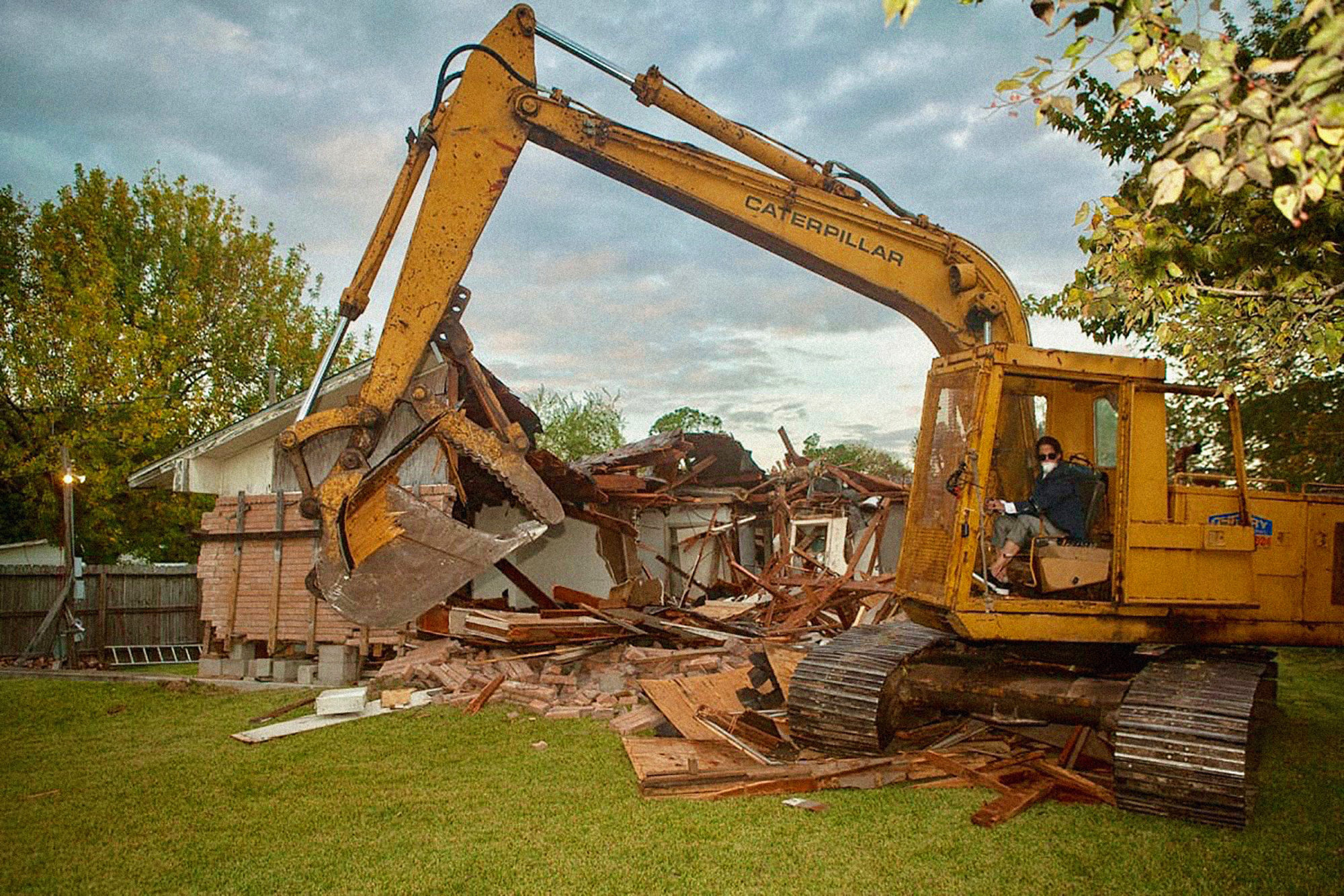 The story of Prototype 180 began in 1999 and continues to unfold twenty years on. It has involved a spectacularly wide-ranging and ambitious programme of performances, tours, alterations, debates, legal challenges and exhibitions that could exist in any or all of the following categories: conceptual art, social activism, urban policy, and neoliberal critique.

When Mary Ellen Carroll developed the idea of moving a house as an artwork, she wrote the following description of the work on an index card:

Living in California at the time, Carroll embarked on a lengthy process to find a suitable house to work with. She landed on Houston in the southern state of Texas, a city of 2.3 million people and the only US city without zoning laws. Carroll had long been interested in the idea of ‘policy as medium’ and understood that Houston’s lack of planning restrictions would make it possible for her to rotate a house, along with its surrounding land, and to begin a debate about urban policy amongst local people, elected representatives and architects.

In 2007 Carroll established a limited-liability corporation and bought a property in Sharpstown, a post-war suburban neighbourhood in southwest Houston with a diverse demographic that reflected the growth patterns of the city. In October 2010 she attempted to rotate the house 180 degrees but the foundations were weak and the building cracked. She tried again on 11 November and this time succeeded. By lifting the house and reorienting it from the back to the front of the property – where it faced a public park – she transformed it into a public building on private land. Carroll framed this rotation as a performance which was carried out in front of group of locals and supporters.

Working in partnership with Houston-based organisations, including Rice University Building Institute where she taught, Carroll began to use the site as an ‘innovation territory’ to test and debate infrastructural solutions and environmental design concepts. Additions, alterations and renovations made to the house over the years included the application of porcelain cladding to the façade, a new water system, a hydroponic curtain wall, and a super wifi system utilising unused television frequencies. The project was also given an online presence through the installation of a sophisticated webcam.

The public programme, made up of tours, exhibitions and debates was positioned as a core element of the conceptual framework of the project. In 2009 Carroll was invited by the Contemporary Arts Museum in Houston to take part in the exhibition No Zoning: artists Engage Houston. Her contribution took the form of a sixteen-foot table/stage that replicated the dimensions and hardwood floor of the living room of Prototype 180, and referenced furniture used for peace talks, treaties and negotiations across the world. The programme included public debates between mayoral candidates on the subject of land use, as well as informal discussion with local residents about their city, zoning laws, and property rights.

This multiphased art project that treated policy as a readymade reached a dramatic climax on 11 November 2017 (exactly seven years on from the rotation of Prototype 180) with a performance piece called Daringly Unbuilt. An audience made up of architects, artists, curators, tutors, supporters, and local residents gathered at the site to mark the next chapter in this eighteen year journey. Architect Charles Renfro give an introductory speech, during which a local man appeared on the edge of the property calling the house “a disgrace to the neighbourhood”, urging those in charge to tear it down. The experimental vocalist Joseph Keckler climbed on to the roof and sang a baroque opera followed by a pop song. Seconds after he’d descended, Carroll drove a 1974 Caterpillar excavator onto the property and, over the course of an hour, destroyed the house. Photographs of the aftermath depict a mound of wooden planks framed by telephone wires lit by the warm glow of an early evening suburban haze.

Carroll is currently working on a plan to use the detritus to rebuild the structure with a group of researchers who are looking into ways of re-using construction waste. Plans are also afoot to develop a ‘xeriscaping micro-park’ around Prototype – a mode of gardening that reduces or eliminates the need for additional water from irrigation. The aim is to experiment with alternatives modes of building and living in the 21st century.

The element of slapstick embedded within the building’s rotation and its demise could be seen to mirror the absurd situation in which a system of entrenched neoliberalism in Houston and beyond is celebrated and perpetuated. This wry, destructive approach is evident in past work including Late (2005) which involved Carroll shipping her 1985 Buick Rivera from the US to Germany, driving it to Munich, and crashing it into the Staatliches Museum für Völkerkunde (State Museum of Ethnology) where it remained, on the steps of the building’s entrance, until the end of the show.