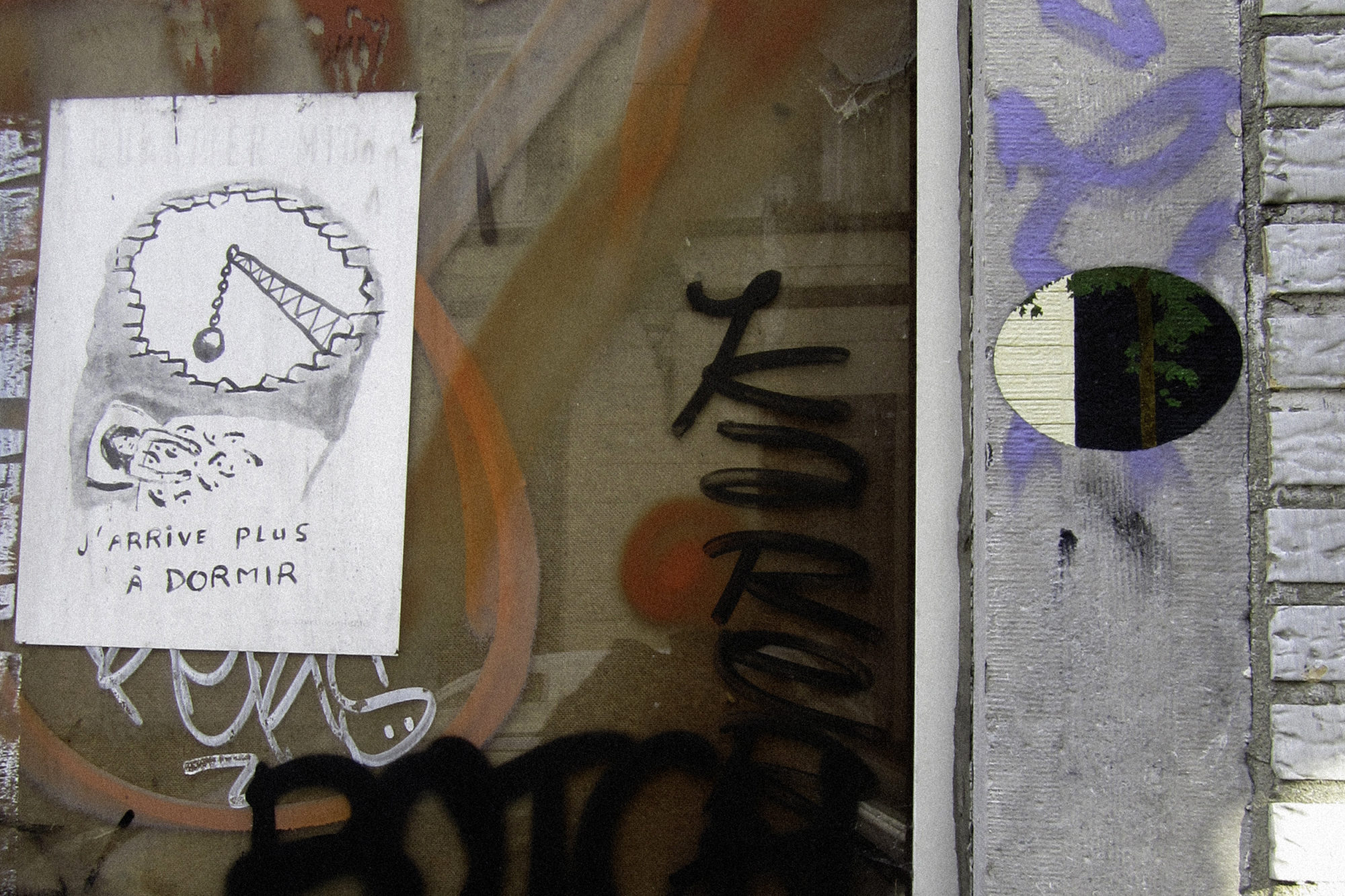 In 2013 Belgian-Spanish artist Olivia Hernaïz began her search for abandoned, derelict houses in the streets around Brussels South train station. The area was on the cusp of an extensive urban renewal programme that involved the demolition of many nineteenth-century buildings.

On her walks around the area, Hernaïz mulled over ways that she might hold the power to prevent demolition programmes from going ahead.

I started thinking that if I painted something on these houses and became a famous painter before their destruction, maybe they would not be destroyed in order to keep the paintings intact.1 In a bid to relate her paintings to their surrounding architectural context, Hernaïz decided to paint what existed opposite the houses, ‘as if they had eyes’.2 I placed a little mirror on the front wall of the abandoned houses and took pictures of elements that reflected in the mirror…I chose to turn my back on reality in order to see it better.3

She began painting in July 2012 and finished in April 2013, having completed twenty-one works. Each season of the year is represented in scenes that depict the everyday clatter of urban life: weeds, sky, trees, brick walls, gates, pavements, buildings, graffiti, broken furniture, discarded clothes, and plastic cups. These 14 × 18 cm oval works were mostly painted in situ on walls, doors and mailboxes, and mimic the technique of miniature paintings produced in the sixteenth and seventeenth centuries across Europe. They create a foil to expectations about the type of art that exists within the public realm: these tiny, fragile, intricately painted scenes are clearly the result of painstaking effort and exquisite attention to detail by an unauthored hand, and exist in direct contrast to the hardy urban fabric that surrounds them. In a text on the project, art historian Iris Lafon picks up on this theme when she writes about ‘artistic desertions’ and reflects on the work as being the ‘orchestrator of its own disappearance’ with its implied wish that it ‘does not quite want to be a work of art any more’.4

Neighbours and passers-by, from small children to older people, were enthusiastic about the project and were keen to ask Hernaïz many questions: Why was she there? What was she doing? Who was she working for? Was she being paid? Some people watched her paint from afar, intrigued by her process. One neighbour called the police, bemused by, and suspicious of, the artist’s intentions.

Hernaïz carried out this project during breaks from her day job as a copyright lawyer, a role in which she regularly defended graffiti artists. She would prepare the colours before venturing into the neighbourhood to carry out her clandestine practice, working on three or four paintings at once, her adrenaline propelling her through the fiercely cold conditions. When she was arrested, she didn’t let on that she was a lawyer; she was intrigued to see how she was treated and what she would be charged with. She never received the tribunal papers the police claimed to have sent and was ultimately ordered to pay a fee.

The project was both physically and emotionally demanding. One building in particular carried a lot of emotional weight for Hernaïz:

There was a wall drawing on the façade of a residential block. It was obviously where a little girl had lived. She’s depicted in bed having a dream about a boulder destroying her house, accompanied by the words ‘Jarrive plus a dormir’ (‘I can no longer sleep’). I did a painting next to her painting. It seemed very raw.5

Friends suggested that she should take the letterbox work on Rue des Chevaliers as a way of retaining part of the project for herself.

It was an internal fight for me to accept the destruction of both my work and the buildings, but I knew I had to let it go. It was a good lesson – to embrace this loss of control. For me, the work has now become a story.6

Only a few of Hernaïz’s pieces of performative documentation exist today; most of the buildings have been destroyed and a new city scape has been formed.