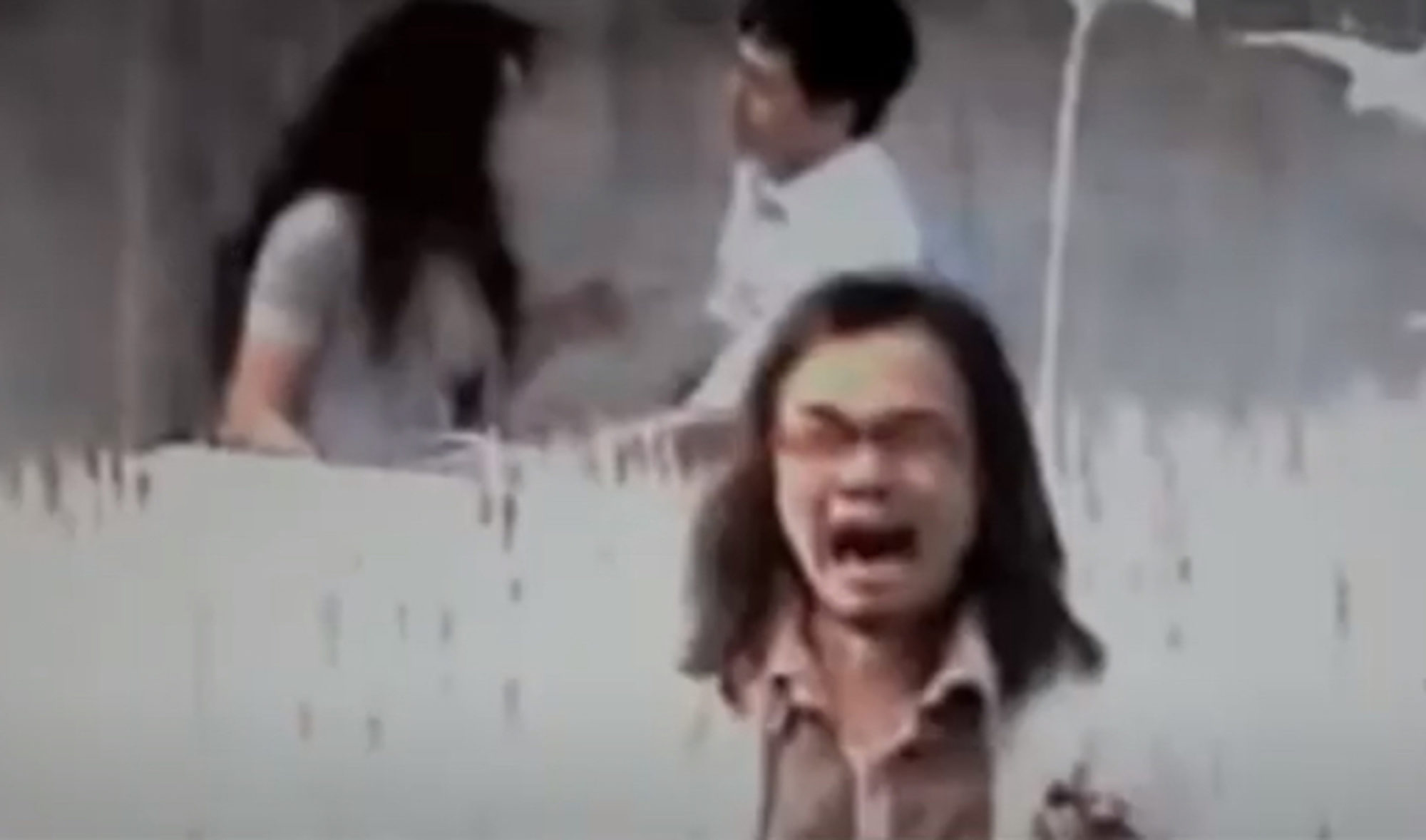 Demonstration at the launch of Outside the Wall, 2009. The artist, Yu Wen-Fu, is shown here, distraught at the destruction of his work. Still from YouTube video.

In 2009, one of Taiwan’s most prominent contemporary artists, Yu Wen-Fu, was invited by the Ministry of Culture to make a temporary artwork for the Jingmei Human Rights Memorial Park in Taipei. The location was once home to the Jingmei Military Detention Centre where political dissidents were imprisoned during the White Terror, the period of martial law in Taiwan that began in 1947 and ended in 1987. It was therefore a hugely contested site with fraught connections for the family members of those who were imprisoned and tortured by the state.

A further, complex layering of the story comes with the fact that the artwork was installed in front of the former prison cell of Wang Hsi-ling, chief of the Intelligence Bureau in Taiwan in the 1980s. Wang was the mastermind of a plot to assassinate the Taiwanese-American writer and journalist Henry Liu – an outspoken critic of the Chinese Nationalist Party. When Wang’s plans were uncovered by the US Federal Bureau of Investigation, the Taiwanese government had no alternative but to confine one of their own at the Jingmei Detention Centre. Wang’s experience of prison life was, however, nothing like the other inmates; his living area was equipped with a kitchen and study, and his family was allowed to live with him. He served six years of his life sentence.

Yu’s work, entitled Outside the Wall, was made up of hundreds of white bamboo stalks, above which a number of white, plaster doves were installed. The artist’s stated aim was to visualise the desire for freedom as felt by prisoners (the bamboo was a reference to prison bars; the doves to freedom). When the work was unveiled, it was widely viewed to be a white-washing exercise that glorified Wang, the Intelligence Bureau chief, and a denial of the cruel, inhumane behaviour of government policy and officials for much of the second half of the 20th century. The Ministry of Culture’s desire to make a public statement about freedom and political expression backfired dramatically.

At the press launch, on 10 December 2009, the wife of a political prisoner who had been imprisoned for twenty-five years, and whose brother-in-law had died of a hunger strike in jail, launched herself onto the artwork, breaking off the doves, pulling the stalks from their foundations, loudly denouncing the deceit of both the work and the commissioners. The woman, Chen Chia-Chun, held up photographs of her husband along with other political prisoners and was promptly arrested. A disturbing YouTube video shows a heated situation turn more turbulent when the artist enters the frame. At first, he is bemused and angry at the destruction of his work, but soon realises the position and intent of Chen, and his complicit role in state-sanctioned incarceration and hypocrisy. He becomes distraught and his anger soon turns to tears.

In a final twist in the tale, a day after the launch, a group of representatives from the Association of the Visual Arts held a protest in front of the Council for Cultural Affairs (CCA) in Taipei. They urged the CCA to respond to the destruction of Yu’s work, and make a statement in support of freedom of expression for artists. The CCA brushed off the protest, saying the event was merely a misunderstanding caused by different interpretations of Taiwanese history. Nearly two months later, under huge pressure, the CCA held a press conference and made a public apology for their mishandling of the affair.

On 24 February 2010, Yu also made a public statement, apologising to the victims of state oppression, inviting ex-political prisoners and family members to join him in dismantling the work. He then filed a lawsuit against the government for misleading commissioning practices and damage to reputation.