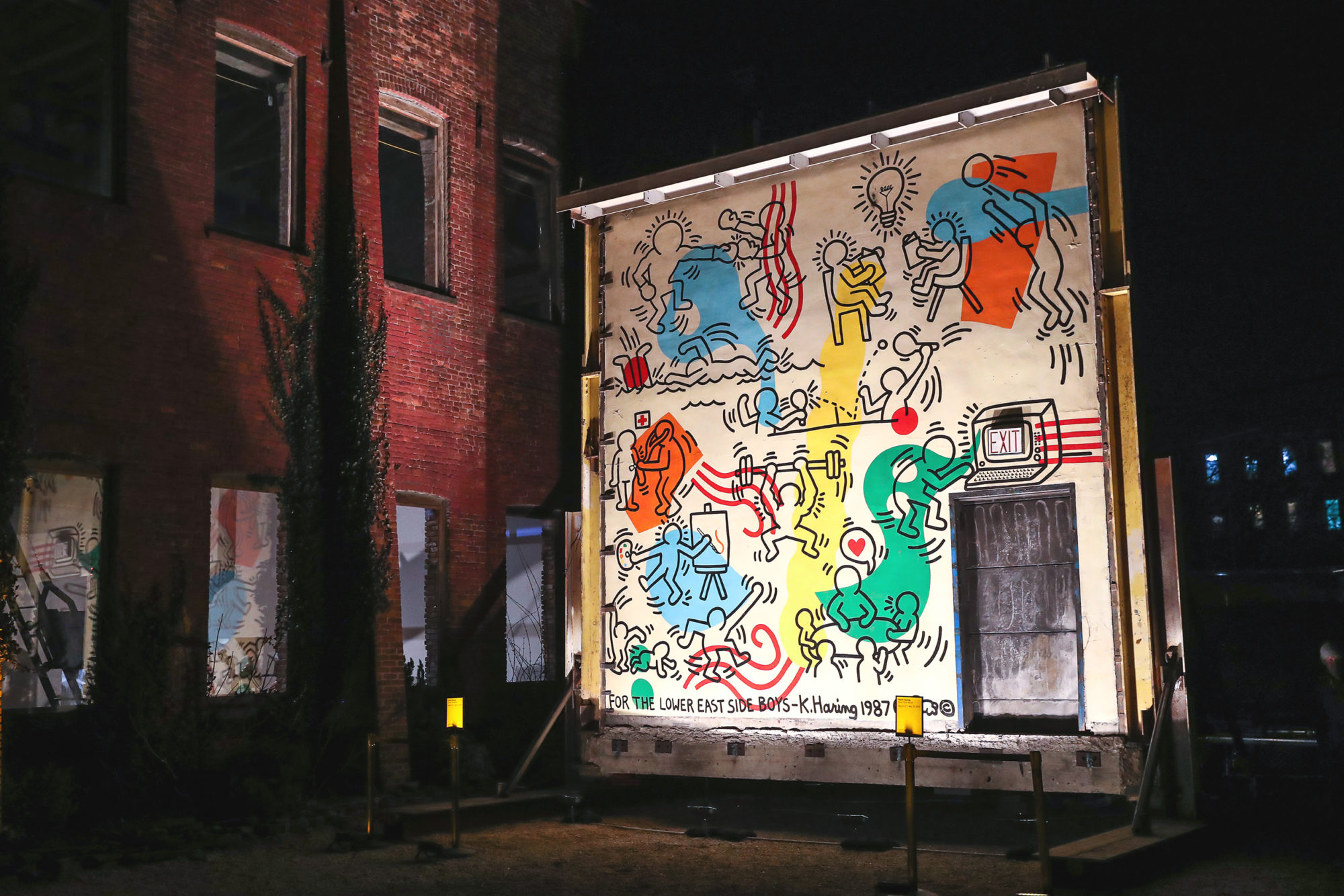 The gleefully enthusiastic figures in Keith Haring’s Boys Club Mural of 1987 are playing table tennis, painting, swimming, reading, and talking about love. Haring painted this work in his signature line-drawing style on a large-scale interior wall in a community space on Manhattan’s Lower East Side, over the course of three days. It formed part of a larger body of activity that Haring was engaged with, making murals, sculptures and drawings for hospitals, other community centres, politically loaded sites, and a vast number of subway panels.

When the club was closed in 2003, a charitable institution, Common Ground, bought the building with a view to demolishing it to create affordable housing for local people. Haring’s cultural currency was riding high by this point, and staff at Common Ground understood that the mural had accrued historic, artistic and financial value. They were stumped, however, by the prohibitive costs involved in retaining, moving, and preserving the artwork.

A friend of a friend of the charity ran an art gallery (the Magnan Metz Gallery) and an agreement was reached that if the directors of the gallery managed to raise the $250,000 needed to protect the work, it was theirs to sell. Boys Club Mural was encased and protected while the building was demolished around it. The wall was then transported to New Jersey where it was eventually sold to a private collector.

In 2019, the 6 × 6 metre mural was displayed in the garden of Pioneer Works, an arts organisation on the waterfront in Brooklyn, New York. It was installed to celebrate the launch of a new clothing range from Lacoste, the long-standing, croc-happy French casual-ware brand. T-shirts, hats, shorts, swimwear and the famous polo were emblazoned with trademark Haring drawings of hearts, groovy stick figures, barking dogs. The company’s marketing department had a field day: ‘Haring’s graphic, primary coloured shapes, outlined in black, resonate with the label’s simple but colourful aesthetic’. The project was positioned as an ‘authentic, global’ collaboration with the artist (who had died of AIDS nineteen years previously, age 32) which highlighted ‘the value Haring placed on community and public art’. Celebrities flocked to the opening; Vogue covered it; Lacoste’s use of a ‘diverse range of models’ was understood to chime well with Haring’s position as king of the street in the 1980s.

This ghostly remnant of a building and community that no longer exists has now returned to storage. The owners hope to wheel it out again at some point in the future. It seems perfectly fitting, given the onanistic growth of global capitalism, that an artwork made to enthuse kids to get creative and sporty in a local neighbourhood has now been co-opted into the language of consumerism.

Haring was aware that it is impossible to control the fluid nature of the public realm. Ownership, the public, the elements, vested interests, money – they all come into play at some point:

I realized, of course, that when you put something in public that it is in a certain way a gift. It’s vulnerable to whatever is going to happen to it from the outside world.1
We use cookies.