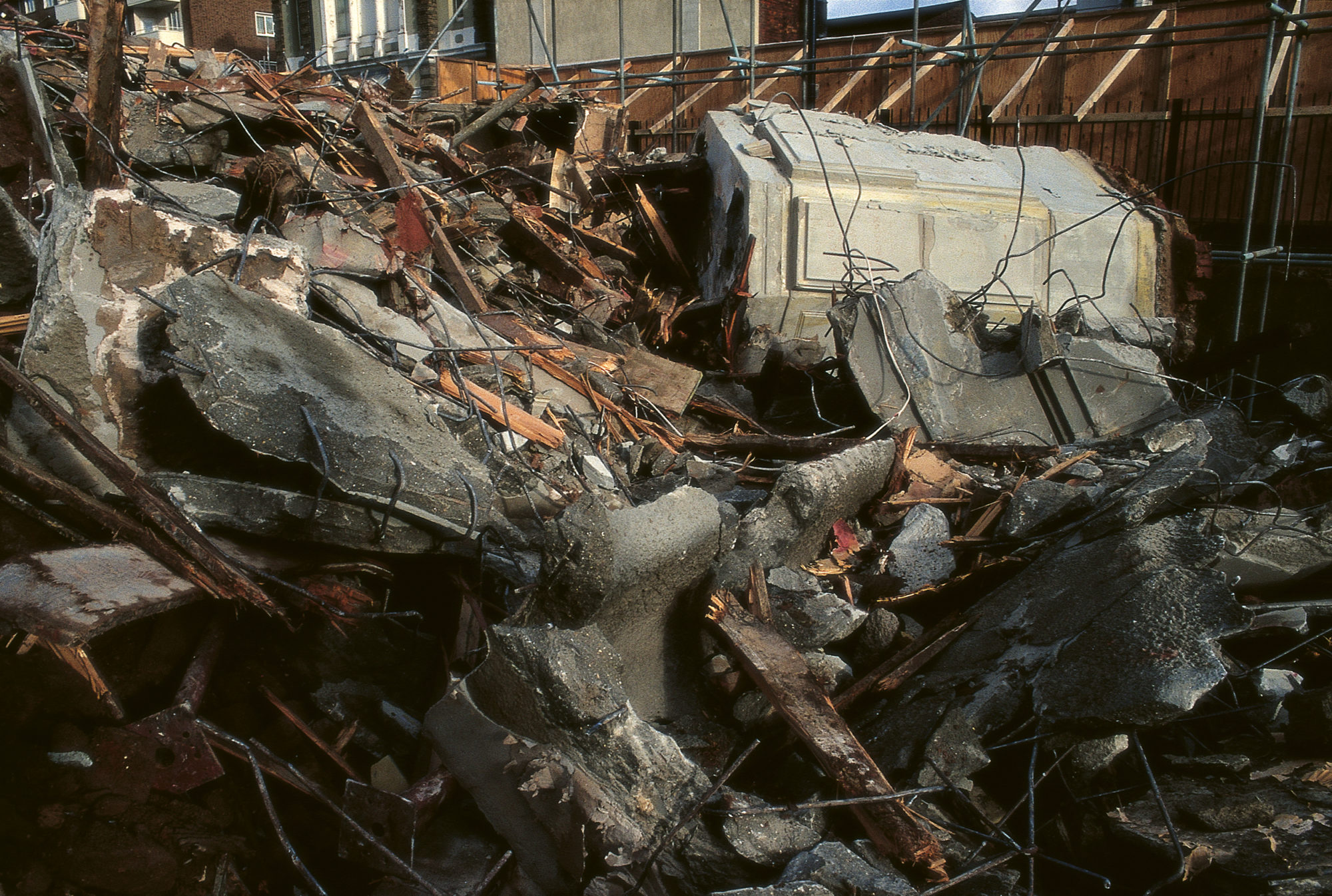 House was a concrete cast of the inside of an east London, Victorian terraced house by artist Rachel Whiteread. The internal life of the building was rendered visible through the careful moulding of staircases, electric sockets, doors, window frames, skirting boards, fireplaces and residual pieces of wallpaper. Originally part of a long section of terrace housing which had been recently demolished, House stood alone in a public park, vulnerable, isolated, open to attack. It presented a charged public platform for a discussion about access to housing, rights to the city, immigration and homelessness, as well as a more complex knot of emotional associations relating to our idea of ‘home’, security, family narratives, and the concept of loss.

Launched on 25 October 1993, House was demolished eleven weeks later by the London Borough of Tower Hamlets. It was always intended to be a temporary work, but was prematurely destroyed by a council whose members considered it to be more relevant to the ‘Hampstead arty crowd’ rather than the people of East London. Eric Flounders, Leader of Bow Neighbourhood Council, made a public statement in which he labelled the work an ‘excrescence’.

House became one of the most contentious works of public art in 20th century Britain. Tabloid and broadsheet journalists had a field day with headlines (Bringing down the house!, Art attack, Art house in a cul-de-sac, Home truths, There’s a stoney house!). Stories circulated about spoof adverts in estate agents’ windows, and milk bottles began to appear on the doorstep of the sculpture. A set of binary oppositions were rolled out in the media: local verses national, the art world verses the ‘real’ world, grass roots realities versus other-wordly dilettantes.

On 23 November a group of jurors at the Tate Gallery announced that Whiteread was the winner of the 1993 Turner Prize, and Bow Neighbourhood Councillors voted that House should be demolished with immediate effect.

On 11 January 1994 a large group of local people, art enthusiasts, and members of the press gathered to witness the premature destruction of House. As a Fiat-Hitachi earthmover took chunks out of the sculpture, Whiteread sat in her car, parked away from on-lookers, watching the scene unfold.

There is a… venerable history of this sort of thing in England, an old tradition of iconoclasm that stretches back to the days of the Reformation, when religious zealots (…) systematically destroyed the sculpture and painting of the English Middle Ages. And perhaps the wreck that was House itself amounts to a monument of a peculiarly English kind: a monument to an abiding and virtually fanatical distrust of visual art rooted deep within the British psyche.1

More than a quarter of a century later, House is testament to the power that a destructive act can wield. It has become more poignant through the act of destruction and is now part of a memory trace for a huge number or people, the majority of whom never saw the work.

People still talk to me a lot about House. It seems to be incredibly evocative and people can bring it up in their mind’s eye. That’s obviously very pleasing, but I also know that part of it is undoubtedly to do with the way it was destroyed.2
We use cookies.